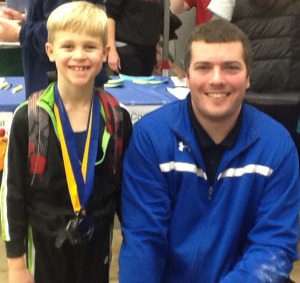 This past weekend, Matthias Ossi, age 8, and a member of the inaugural HealthQuest Men’s Gymnastics Team performed outstandingly at his first and second meets ever. The first, the Lehigh Valley Men’s Invitational at Force Sports Academy yielded three first-place medals, on rings (10.9), vault (10.6), and high bar (11.0). Matthias also won third place on floor (10.3), and scored fifth all-around. His second meet, Local #1, hosted by CS Gymnastics in Flanders, yielded highest achievement (blue ribbons) on four of six events, and a highest achievement (blue) ribbon in all-around, with a final score of 58.6, which would translate to a striking 9.766 average on the six men’s events.