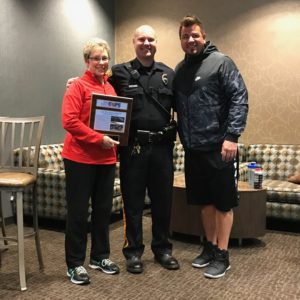 On Wednesday March 1st Officer Frank Emanuele of the Flemington-Raritan Police Department presented Lyn Tierno with an award in honor of her late husband Tony Tierno. Tony was a beloved member of the HealthQuest Team, he was also a mentor and friend to many in the community. Also a great humanitarian, he had been involved in the Special Olympics since 1986. He served as the State Director and Head Coach of the New Jersey Team USA where he trained power lifters who brought home four World games championships.

The Hunterdon County Local 188 of the New Jersey State PBA, inspired by Tony’s passion and spirit took the Polar Bear Plunge to benefit Special Olympics. Frank Emanuele stated “We’re plunging this year in tribute to his memory and services to the Special Olympics. We can remember and honor Tony’s legacy just by participating and raising as much money possible in his honor”. Fifteen members of the Local 188 raised $2500 for the athletes Tony so passionately worked to help.